Mackie C4 to OSC and back

I started the new open source project contrOSC for Linux, which enables the DAW controllers Mackie C4 and Universal Control to communicate with other applications via OSC protocol. This bridge software works bidirectional so the state can be shown on the hardware displays. 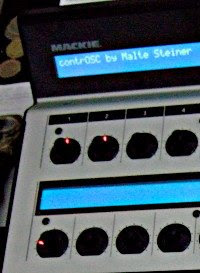 The Mackie C4, featureing 32 knobs with LED rings and 4 displays, is at the moment with 400.- euros rather cheap. Unfortunally not much software supports it so I decided to create contrOSC which will make it easy to integrate it for instance in Pure Date or Csound patches via OSC commands which are going to be well documented.
Not so well is the developer documentation for that device, nothing is available appart from Apple Logic docs about the Universal Control but it was easy to midisniff the communication. Expect a release soon...
- July 13, 2009