Attack Of The Gobos

We had to admit it, the current Block4 recording studio sounds bad. Lot of strange, metallic echos with a certain artificial character made it difficult to mix well. So the only consequence was to improve the room acoustics but we didn't feel fancy to stick these foam panels to the wall because it is not decided yet how long we stay in these rooms anyway. Fortunally there are freestanding Gobos or GoBetweens which didn't need much work to set up. 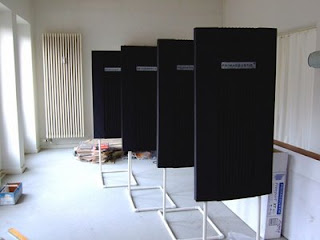 the gobos, ready to go to the studio

We orderd some Freeports XTs from Primacoustic and put two behind the monitor speakers and two to the opposite wall, hoping they cancel the resonances. But not before I did some impulse recordings of the strange room behaviour for later simulating it via convolution!
One major mistake is to make the room totally anechoic which would also lead to unatural and bad mixes so four Gobos should be enough. The result is rather impressive. They didn't eliminate the echos totally and the first days they emit some fumes from the adhesives but the recordings now sound a lot deeper and more defined, actually a bit louder although with less usage of compressors.
The impulse recording I use now as a nice and strange effect in a controlled manner.