two albums for the turn of a decade

music for the end of a decade:
Notstandskomitee: deleted


music for the beginning of a new decade:
Akustikkoppler: Inspektor

one more thing: on tomorrows last day of the year me and my French label Serendip Lab also drops my new soloalbum deleted by my project Notstandskomitee, also available as download or limited cassette edition. 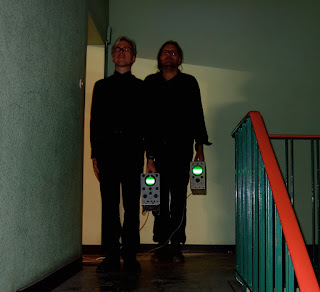 Around 2004 Matthias Schuster and Malte Steiner started to record studio sessions together in Schusters Geisterfahrer Studio in Hamburg. The tracks are recorded in one go without any overdub and later just compiled and mastered for the different releases. Stylistic they don’t follow any rules.

Matthias Schuster started 1979 the band Geisterfahrer in Hamburg, combining from the beginning a Punk setup with electronics. In his studio he recorded and mastered in the next years nearly every release of the label ZickZack Records with diverse bands and artists. He started his own electronic projects Bal Paré, Im Namen Des Volkes and in the 90s Das Institut with the artist Trautonia Capra. Matthias Schuster still lives in Hamburg, Germany.

Malte Steiner started 1983 with electronic sounds as background for performances on his exhibition openings. He founded the avantgarde project Nebelhorn and later in 1987 the Industrial project Moderne Fabrikanten, but it was first Das Kombinat which reached a wider distribution since 1989. 1991 he started to work on his soloproject Notstandskomitee and in the next years several others like since 2017 the noise project TMS and the livecoding project codepage, both together with the artist Tina Mariane Krogh Madsen. After living some years in Berlin, Malte Steiner moved to Aalborg, Denmark.