With SynthForge a new modular softwaresynthesizer is born for Linux. Its early release but functional and free open source. Personally I percieve it a bit redundant because of its simularity to AMS but didnt checked out SynthForge yet. Get it at
http://sourceforge.net/projects/synthforge

At the french interactive computing laboratory ENAC they work on native multitouch support for Linux. They bypass the X11/Xorg and process the data in kernel space. Sourcecode is available.
- June 29, 2009 No comments:

Found this software for slicing and rearranging beats and creating loops, its free open source and available for Linux and Windows.

[update] Just in: The cellar is not flooded but unavailable hence no DJ set tonight!
sorry for the let down...

At this years Repsoldstrassenfest in Hamburg I am not going to perform but do one of my rare DJ-sets. From 22:00 on todays Saturday in a cellar at an empty shop corner Rosenallee/Repsoldstrasse I will surprise you with a strange mix of Industrial, Plastic, Electronica, dspHop and other electronic music, think Klangtest. You can follow me on Twitter for uptodate information, just in case that cellar get flooded or else:
http://twitter.com/herrsteiner
- June 27, 2009 No comments:

On last monday I cleaned up and hand over the keys at Linda, finally the exhibition is done. 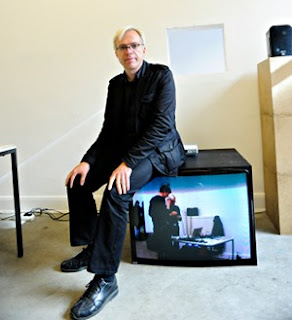 After this intense time I always get a bit melancholic when I see all the art pieces packed up.
At Urban Units there is some documentation but still some pieces are missing. Additional pictures can be seen on Lindas page. A nice blog entry is at http://www.mobile-sessions.com with a German review.

In November I will do my next exhibition in Hamburg at Einstellungsraum, topic will be shared spaces.
- June 27, 2009 No comments:

ultimate last day of my exhibition

From 15:00 to 19:00 today you have the last chance to visit my exhibition SUB/OB I do with the group Urban Units in Hamburg, Germany.

Till sunday the 21.6. inclusive you have the chance to see my latest exhibition SUB/OB at Linda e.V. in Hamburg I do with my group Urban Units. Here is the German text inclusive the opening times:

Particular proud I am on my multitouch interactive installation City Generator:

return of the homecomputer

With the advent of the small netbooks it was just a matter of time when someone build a whole computer in a keyboard, like in the good old late 70s/early 80s. Despite Asus strange hostile behavour against Linux lately, the operating system which helped them to create a cheap netbook and get them a better deal with Microsoft, they demoed a version of their EEE Keyboard with Intels Linux Moblin. They mentioned also that with Moblin they can use the multitouch functionality of the buildin touchscreen.

Quantix 8 is a wavetable oscillator module for hardware modular synthesizer.

Its available as prepared pcb and preprogrammed PIC chip. The page has some informations and links about wavetable synthesis and provides a Windows application for editing and dumping the waves which looks interesting.

with opencv, dont forget cvWaitKey() when grabbing your frames

Currently I program an application in C++ with openCV and brought it together with the QT library. Transforming an example was easy, at least to get it compiled. But the capturing process was not running in its own loop, an update was triggerd regularly by a timer. The result was that I recieved only the first initial frame.

Solution was to reinsert the waiting for key function cvWaitKey with a small value which I removed because it seemed without any use. Now I get all frames...

Whowatcheswho is a title of an installtion I show in my upcomming exhibition but reality beats art again: The German conservative newspaper Hamburger Abendblatt has an article about the local police who uses private flats in the neigbourhood Schanze (Schanzenviertel) for videosurveillance. Schanzenviertel used to be a creative neighbourhood in the 80s but lost it appeal due to recent gentrification. The police say they need to observe some of the new upperclass-shops to prevent further vandalism and decide to ask around if they can use private flats.

The German article even has a poll on videosurveillance without notice.
- June 08, 2009 No comments:

Alex Norman started an open source editor for the Dave Smith Instruments Evolver. So far it works with the monoversions only but maybe you can jump into that project and code support for Polyevolver? Read more at

I am preparing the hard and software for my forthcomming exhibition with Urban Units. Some computers received an major os update and I prepared our new Acer Revo (We are all Revo) to run well with Linux too. But it took me a while to get it running well with low latency audio, first it seems that the Revo couldn't run audio without xruns at all. I tried several distros like Ubuntu Studio, Debian and Fedora Planet CCRMA, compiled my own low latency kernel but no avail, it wont work. I was about to blame the NVidia closed source drivers, but wanted to run on that computer to benifit from the hardware.

Finally I discoverd the reason, it was actually the wireless driver which disturbed the sound. When I switched it off, it runs very well with the build in soundcard and the binary NVidia drivers. No interrupts anymore, even on heavy load plus OpenGL graphics.

Marije Baalman was in the simular situation and descriped her adventures on her blog:

This German discription helped me to get started because its a while ago since I compiled a whole kernel on my own:

Found an interesting blog on an DIY modular synth, also located in Hamburg. Not much information but nice sounds:

PPG founder Wolfgang Palm has now an official site at Myspace and runs an interesting blog about the history of his company and his synthesizers.

Interesting are also the comments to the blog providing even more insider knowledge.
- June 04, 2009 No comments: