Vital Weekly reviewed Akustikkopplers album Alles Muß Raus in their issue 1337 and featured it in their podcast .
http://www.vitalweekly.net/1337.html
- May 30, 2022 No comments:

With all the deaths happening worldwide all the time, it starts to get personal. Among the remarkable losses yesterday in the music world alone, is the Berlin artist Taymur Streng.
I met him the first time at a concert of his project Kunstkopf and the following years several times during his concerts in different constellations and solo, during my time at the Hörbar in Hamburg.

When I moved to Berlin for a couple of years and organised the PureData Stammtisch at c-base, he became a regular. A brilliant mind, always busy, always working on something. And a true unique and original, sometimes intense, character. RIP Taymur Streng.

performance protocols is an interdisciplinary platform for instruction-based art and performative processes. From 2020 to 2022, performance protocols are presenting a series of Nordic events where this edition will be in collaboration with Performance Art Bergen. The event will take place at Skomakerdiket, Fløyen, in Bergen with natural/cultural environments as its theme.
This theme explores what nature-culture relations mean in an environmental context, and here specifically in the context of the location - having nature nearby though shaped by its cultural context and infrastructures for city-dwellers and tourists.
For this performance protocols event, we have invited two members of PAB to create and perform instruction-based performances that deal with the environment in relation to Bergen's positioning with nature and culture colliding, how they affect each other. These two artists are:

- Hans Christian van Nijkerk with the participatory performance "#Influenced".
- Ingeborg Blom Andersskog with the score "When I move I change" which will be performed by another member of PAB.

As part of the event in Bergen, performance protocols will include scores from two Nordic artists invited by the curator, which will be actions offered for local interpretation. These two artists are:

- Elina Vainio (FI) with the score "Nosewitness (considering circulations)" to be performed by another from performance protocols.
- Maja Gade (DK) with the participatory score "Colour Mapping of Stones".

In the afternoon on May 28. there will be an informal discussion about collaborations and instructions with Tina Mariane Krogh Madsen/performance protocols and Performance Art Bergen.
The event will be from 13-17:
Performances and processes from kl. 13-16 and discussion from kl. 16-17
(a detailed schedule will be released closer to the event)

Practical info:
The artistic director and curator of performance protocols is artist and researcher Tina Mariane Krogh Madsen (born in DK, lives and works in Aalborg/DK & Helsinki/FI). Madsen curates this edition of PAB Local. More about performance protocols: http://performance-protocols.net/
Performance Art Bergen (PAB) is a membership organization for performance artists and others interested in visual performance. More about PAB: http://www.performanceartbergen.no
- May 27, 2022 No comments:

Only a few days left to preorder the new Akustikkoppler album Alles Muß raus on 12" Vinyl for a reduced price. Some copies already have been sent to DJs and reviewers, and they love it. Baze.Djunkiii from Hamburg made even an unboxing video: 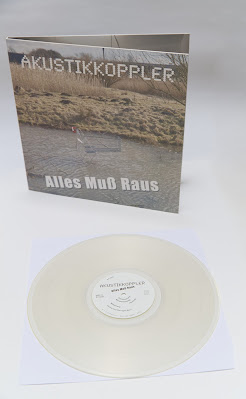