the texts my better half Tina Mariane Krogh Madsen wrote on netart for Net-Specific (a platform that she organized and curated for Museet for Samtidskunst in Denmark) in 2012:
- note that most projects are due their nature gone, but the texts are still there.

In the third installment of the block4 Social Distancing Concerts Notstandskomitee plays another concert, this time on our big modular synthesizer. Streaming from our studios gives us the possibility to work with equipment we are not able to take with us to a regular concert setting, hence it gives you also a unique experience. The patch is the set.

It will be streamed today 17:00 center euopean time from youtube from this link


and like the other concerts archived for later consumption
- March 22, 2020 No comments:

the first one of the block4 Social Distancing concerts went well. It is archived and can be rewatched at the Youtube link in the post below. Next up is the electro acoustic project Elektronengehirn performing on Saturday 17:00 on the modular at studio A, also an exclusive set.

The block4 Social Distancing Concerts are scheduled for Friday, Saturday and Sunday 17:00 Central European time (as in Germany and Denmark). The start will be a Notstandskomitee set on some grooveboxes and modular synth.

I made my first remote concert sometime around 1994 with my band Das Kombinat. It was for an experimental festival and the medium was analog landline telephone. Sonic bandwidth was limited.

Instead of streaming I became more interested into digital puppetry, just sending control data. We experimented with VRML and the multiuser server Blaxxun to create audio visual performances, but it was to ahead of its time in the 90s.

2010 I did a remote concert from my then home in Hamburg, Germany to Esc Im Labor Graz for the Art's Birthday event. I send them a PD patch in advance which I then remote controlled via OSC protocol.

With my projects with Tina Madsen I did some streaming concerts, with our noise project TMS we streamed 2016 from Copenhagen for the AudioBlast Streaming Festival and with our live coding project codepage for last years Algosix event.

Now its time for the block4 Social Distancing Concerts from our studios in Aalborg. It gives the opportunity to work with all equipments we normally can't take with us since no booker would pay the transport costs. For the start this Friday, Saturday and Sunday I will do concerts with my solo projects Notstandskomitee and Elektronengehirn. Exact times will be announced soon.
- March 18, 2020 No comments:


It comes complete with a musicvideo:

The complete Elektronengehirn concert Piece For Modular Synthesizer And Real Estate Data 28.2.2020 at PERFORMANCErum Aarhus, part of The Big Crash.

After a month my solo exhibition The Big Crash at Spanien 19C in Aarhus comes to an end. The last day is this Sunday the 8. March, from 13:00 to 17:00. Come and experience art pieces for the pending burst of the real estate bubble. AI based oil paintings, kinetic sculptures, VR environments and more. 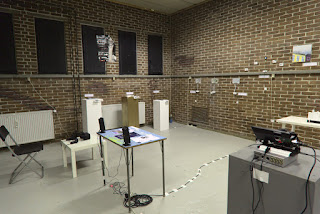 Kunsten.nu made a nice review in their gallery round, you find it in the lower part of the article in Danish.

Some quick impressions can be seen in this video:

music video The Price Of Berlin

the video to The Price Of Berlin from my Elektronengehirn album The Big Crash, made with the CAD data from my exhibition of the same name.


Often in Berlin you have to hear that there is a price you have to pay for being there, but you wanted it.
- March 04, 2020 No comments:

Elektronengehirn: The Big Crash album out

The Big Crash, music for the pending burst of the real estate bubble


As an extension of my art concept The Big Crash, art for the pending burst of the real estate bubble, I composed 9 pieces inspired or even derived from real estate data between 2018 and 2020. Currently The Big Crash is exhibited at Spanien19C in Aarhus.


The new album is now available on bandcamp:

RIP Berlin artist Tabea Blumenschein, who among other works collaborated with Ulrike Ottinger on movies like Madame X, Bildnis Einer Trinkerin and Dorian Gray Im Spiegel der Boulevard Presse, not only starring in them but also designing the costumes.